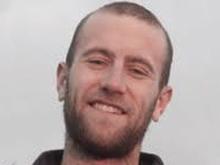 Since the fall of 2014, I have been helping lead a small group of Bay Area healthcare providers, social scientists, and graduate students – now known as the Structural Competency Working Group – dedicated to developing, refining, and disseminating structural competency trainings for healthcare providers and trainees. In this brief article, I will summarize findings from my evaluation of the pilot version of our training and describe the current contents of the training.

Evaluation of the Pilot Training

Our first training occurred in June 2015 at a family medicine residency program. Evaluation included surveys immediately post-training and a focus group one month later. Contrary to my expectation, the residents in attendance at the focus group – all of the training cohort except those on call or out of town – expressed that structural competency had been at the forefront of their minds. Several described structural competency having a notable impact on their day-to-day delivery of patient care.

This increased awareness of the structural influences on health and healthcare was, however, paired with a certain sense of distress. Residents expressed feeling overwhelmed with the seeming magnitude of these issues – and uncertain about how best to respond to them. For more on the findings of this evaluation including numerous quotes from residents, see Neff et al 2017.2

We subsequently revised the training in response to the findings of this evaluation. Since then, we have implemented this revised version of the training over thirty times, offering it to various audiences – from medicine, social welfare, and physical therapy students to medical residents, global health fellows, and various faculty and staff.

The training – which consists of interactive, reflective, and didactic components throughout – is organized into three modules:

After a brief introduction to frame the day, in module one we begin by asking participants to read and discuss the medical note of a “frequent flyer” who is brought to the emergency department after being found down on the street due to presumed alcohol intoxication. 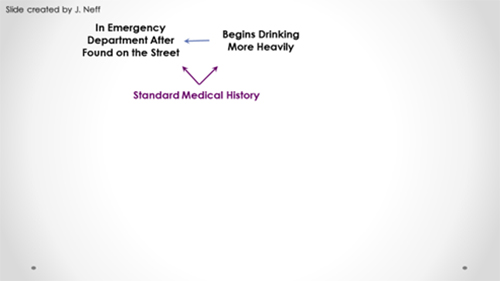 Figure 1.1: Diagram of the case with standard medical history

Next, facilitators walk through this patient’s life trajectory via an “arrow diagram” (see figures 1.1 and 1.2). It starts with the information about the patient’s life contained in his chart – that alcohol consumption led to an altered level of consciousness – then reveals additional blocks of text one at a time, starting with his origins as a corn farmer in southern Mexico. It traces the various challenges he faces after he is put out of business by an influx of American corn, which culminates in his drinking heavily following physical assault while living on the street. His life-course sketched accordingly, we highlight in red text the influence of various social, political, and economic structures on his trajectory.

This diagram sets the stage for the next portion of the training, in which we introduce the concept of structural violence. In brief, structural violence describes that inequities in social, political, and economic structures lead to bodily and emotional harm (violence) for certain people.3

We pair the concept of structural violence with that of naturalizing inequality.4 In this segment, we highlight how the effects of structural violence and other forms of inequality can be “naturalized” by a discourse that focuses on (a) individual behaviors and choices, (b) so-called “cultural” practices or beliefs of certain groups, and (c) genetic/biological predisposition. The point of this section is not to suggest that individual action, culture, and genetics are not important influences on health, but instead to highlight that focusing primarily on these factors distracts attention away from the structural drivers of health disparities.

Module 1 closes by discussing the origins and definition of structural competency, including the ways it tends to be similar to and different from curricula framed in terms of cultural competency and the social determinants of health (see figure 2).

Module 2 shifts focus from the ways that structures affect health to the ways that structures similarly affect the practice of healthcare. To start this section we introduce another arrow diagram – this time illustrating the influence of structures on the provider who cared for the patient described in module 1 (see figure 3). As with the patient arrow diagram, we trace the provider’s trajectory, then highlight in red text the influence of relevant structures. We conclude this module by discussing the ways structures influence not only the quality of care provided to patients but also provider burnout, diagnostic categories, and evidence-based medicine. 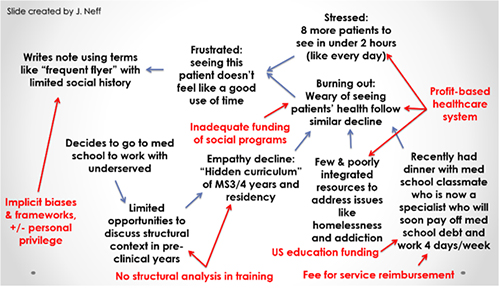 In module 3 we focus on ways of responding to harmful social structures. We offer several examples, both historical and contemporary, of providers mitigating structural violence, then introduce the “levels of intervention” (see table). We close by asking participants to reflect on the levels at which they feel able and interested to act, in both the short and long term.

Evaluation of this modified curriculum suggests that the above changes have helped address the sense of distress and uncertainty described by residents who participated in the pilot (article forthcoming).

Next Steps: Adapting and Expanding Upon the Training

As noted above, this training has been implemented with a wide variety of healthcare professionals, at all career stages – from pre-health undergraduate students to faculty. Today, in addition to continuing to refine the training in response to feedback and facilitator experience, the SCWG is working to better tailor the training to suit a variety of audiences – including mental health providers. We will implement a pilot of this adaptation with interns in the UCSF Psychiatry Residency Training Program in the fall of 2018.

If you are interested in bringing a structural competency training to your institution, you can visit our website at structcomp.org for more information.